The owners of a horse which slipped into a canal have said they were terrified their beloved animal was going to drown.
Pepsi the horse lost her footing while going for a morning ride on a canal towpath in Leigh and plunged into the murky water.
Luckily owner John Gaskell was not riding her at the time, he had just dismounted so he could get past a tricky patch of overgrown trees, on the banks of the Leeds and Liverpool Canal near Plank Lane.
But poor Pepsi, a 15-year-old middleweight hunter, lost her balance and splashed into the brown canal.
The fire brigade were called and crews from Leigh spent a gruelling hour trying to get her out. 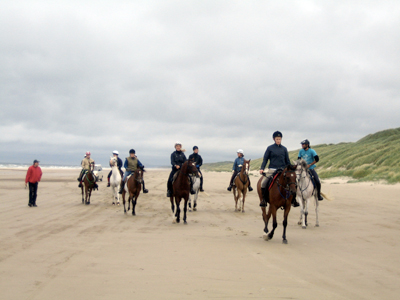 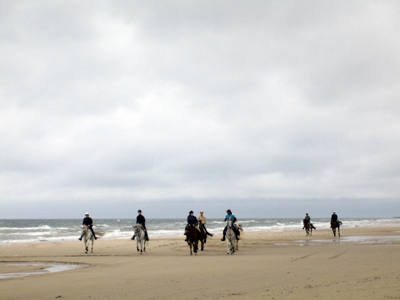 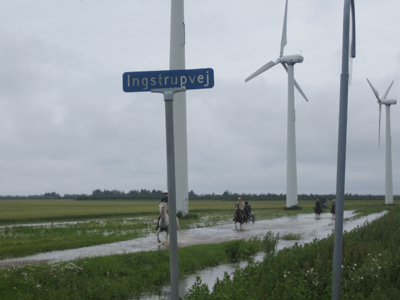 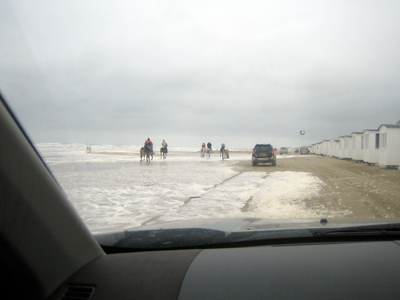 The Scandinavian Championship will be held in Denmark this weekend.

Lone Aalekjar, Chef d'Equipe for Denmark submitted these pictures of the Denmark on a training ride along the beach!

Lone will try to keep us posted on results during the weekend.
Publié par Endurance.Net à 10:05 Aucun commentaire:

60 teams started the event and there were 22 completions at the event.

Metabolic Eliminations in Race Results - Why it Matters

Riders Leaving Gate 5
Image by Merri Melde
I have noticed that there are a few discrepancies in the official FEI results of the recently completed FEI European Endurance Championships. In particular, this images shows a group of riders (the leaders) leaving gate 5 of the race - heading out onto the 6th and last phase of the event. The rider #05 is clearly out of Gate 5 riding toward the finish. The subsequent listing of #05 as pulled for Lameness at gate 5 is clearly erroneous in light of the image referenced above. The evaluation of lameness or metabolic elimination clearly did not occur during the gate 5 hold. This is a small error.

But, the listing of elimination for Lameness or Metabolic in the results of events over the coming 12 months is a very big deal. We now have a stipulation of qualification for the WEC which relates to penalizing riders (and horses) that receive metabolic eliminations from events. I am wondering how the FEI intends to monitor and certify the results of the events which occur in this time frame, as a metabolic elimination now can result in inability to attend the WEC.

The question becomes amplified if, as seems the case, the FEI allows errors to exist in the official results of championship events.

Everything Endurance - training, clinics, horses, information - it's all there!

Staff Reporter
QATAR Foundation (QF) extended its support to the Al Shaqab Endurance Team at Portugal Open 2007, according to an official of the foundation.
Qatar Foundation was the sponsor of this year's FEI European Endurance Championship ‘Open’ that started on September 8 in Portugal.
The prestigious event covers 160km, with over 80 riders from 20 countries. Qatar was represented by Qatar Foundation member Al Shaqab.
Al Shaqab entered seven horses and six top endurance riders – Fahad Munif al-Hajeri, Essa Ahmed al-Mannai, Abdul Rahman al-Sulaitin, Abdulla Towaim al-Marri, Hamad Ali Rashid al-Ardi and Atta Mohammed Peer. They competed fiercely and were leading for some time until the leading horse had to be withdrawn.
The gold medal was won by the French team, silver was awarded to Bahrain and bronze to Spain.
Sheikh Hamad bin Ali al-Thani, breeding adviser and board member of Al Shaqab, crowned the winning teams. He expressed his compliments to the organising committee for making this championship a success.
Qatari team leader Ibrahim Saaed al-Malki expressed hopes for the championship stating: “Qatar Foundation represented by Al Shaqab stud was keen to participate as an official sponsor and with a team of riders in this championship to show its support for this sport which is deeply rooted in the Arab
peninsula.”
Publié par Endurance.Net à 06:13 Aucun commentaire:

Mubarak Khalifa Al Shafya crossed the line with the 11-year-old gelding Zakah Zahara one minute ahead of Jean Phillipe Frances, who won the European title with Hanaba Du Bois.

Spain's Jaume Punti Dachs and Maria Alverez Ponton set a new record by becoming the first husband and wife team to stand on the medal podium in second and third place respectively.

The French team of Sophie Arnaud, Virginie Atger, Phillippe Benoit and Pascale Dietsch regained the European title they last held in 2003. Together with the World Championship, the title gives France a stranglehold over the sport's international silverware.

France's chef d'equipe Jean-Louis Leclerc, paid tribute to the achievement of the squad saying they had achieved "great things" at what he described as a difficult championship.

"Throughout the day it was very hot. The track itself was difficult. The temperature rose to over 30 degrees during the day and it was very humid. The terrain changed throughout and was not to be underestimated. The riders had to adapt their tactics to the changing circumstances throughout the competition."

The increasing success of the Middle Eastern countries was signalled with a silver medal in the open team competition for Bahrain. Spain took bronze in the open team event and silver in the European contest, where Switzerland joined them in third place on podium.

Images of the Finish

Top 5 riders arrived (UAE) - tons of energy. Sh Rashid (#2) 's horse Kevin de Narthou was pulled - telltale head bob - slight but there. Nice show of sportsmanship tho - a smile, 'yes, no problem, thank you' , and a handshake with the vets. Sh Ahmed is still on the trail, the 3rd team member now.

There's quite a bit of excitement for UAE - I'm feeling it too. It's not over yet, but they're doing everything right, and well, and with a high degree of professionalism and sportsmanship.

The top 14 riders are all within 15 minutes of the leaders!!

Merri's taking a few more photos, we'll catch the front runners as they leave and then head back to the main camp for the finish.

A little cooler, slight breeze, less humid -
I just talked to Darolyn - she's still hanging in there. Cheryl's doing great, as is Jan. :)

I have a printout of team standings as of VG 4,

The team, led by Bahrain Royal Equestrian and Endurance Federation president Shaikh Nasser bin Hamad Al Khalifa, had a practice session yesterday at the endurance village in Lisbon ahead of the upcoming six-stage event which will be over 160 kms.

The first stage will be over 35 kms, 23 kms for the second and fourth stages, while 27 kms is for the third, fifth and sixth.

Bahrain will be among top teams in the fray, including three GCC squads - the UAE, Qatar and Saudi Arabia.

A meeting for the participating riders will be held today, to be followed by a three-hour veterinary inspections.

The Portuguese Equestrian Federation, represented by its vice-president, Paulo Branco, signed a deal last January with Qatar Foundation to sponsor the championship. The event was officially presented in Qatar in a press conference. Following the many applications, Portugal was the country chosen by the International Equestrian Federation to organise the championship.
EnduranceEurope.net Coverage
Publié par Endurance.Net à 08:06 Aucun commentaire: