The squad is going to Mont le Soie, Belgium leaving the UK on wednesday 28th April. They will be riding in the 120k 2* ride on Sunday 3rd May. Team details .....

All riding in the 120k 2* ride on Sunday 3rd May
Publié par The Equestrian Vagabond à 11:04 Aucun commentaire: 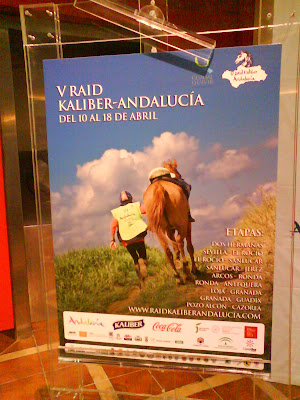 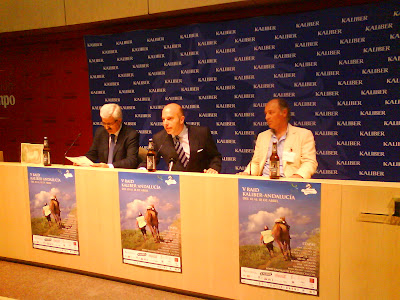 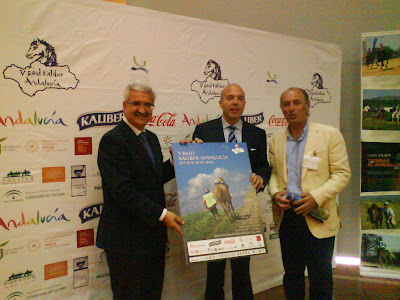 Posteriormente tomo la palabra Jose Manuel Soto el cual presento el video del Raid confeccionado con bellas imagenes de Kaliber anteriores. Tambien informo del recorrido por los bellos parajes andaluces y de las dificultades generales que estos ultimos tiempos estamos pasando, pero que a pesar de todo, sigue adelante este bello evento ecuestre. This morning at the headquarters of the Cruz del Campo in Seville, has officially launched the V-Kaliber Andalucia with the presence of D. Manuel Jimenez Barrios, Secretary General for Sport Ministry of Tourism, Trade and Sports of the Junta de Andalucia, D. Antonanzas Diego de Toledo, Director of Sponsoring & Events Image Heineken Spain and D. Jose Manuel Soto Alarcon alma mater as the Kaliber-Andalucia. Empezo the event with the official launch of the V Poster Kaliber-Andalucia. Later, speaking Jose Manuel Soto who presented the video of the raid made with beautiful images of previous Kaliber. Also reported the tour of the beautiful places in Andalusia and the general difficulties in recent times we are passing, but nevertheless, keep going this beautiful equestrian event. Then responsible for Kaliber spoke in Andalucia, as one of the leading proponents of this Raid and meaning the magnificent views of the event. Cerro the act the Secretary General for Sport of the Junta de Andalucia, reminding the union that unites him with Jose Manuel in the Raid, because since the first Al-Andalus, is supporting the sport, which provides information to Andalucia by worldwide. At the close of this presentation, they gave us all the wizard with glasses of beer, accompanied by rich viands prepared by Gambrinus school students with a good ham from our friend Maximilian.
Publié par Endurance.Net à 07:32 Aucun commentaire:

T HE Wadebridge endurance ride is the longest running ride in the South West, having taken place every year since the 1970s.

It is always the first competitive ride of the season and for many endurance riders, it is the start of the 'serious' stuff.

With its mixture of roadwork, forestry and tracks, it also makes a good ride for young horses or riders doing 32km (20 miles) for the first time. The steady roadwork to checkpoint one, particularly the long hill up to Burlawn, takes the edge off the excited horses before they reach the faster tracks in the forestry.

This part of the route is then followed by a mixture of lanes and tracks, before the long uphill stretch back to the Royal Cornwall Showground. This brings the horses back to the finish and the final vetting at a sensible pace.

One rider who was giving her four- year-old Arab stallion, Silver Zaanif, his very first outing, was Jemma Jackson, from St John near Torpoint.

"He is a pleasure to ride, interested in everything but so laid back," she said. "We had a fabulous ride.

"Everything at the venue was so peaceful and mellow, and all the other riders and the officials were friendly and welcoming.

"We shall definitely come again although I am only getting him out and about occasionally this year, he's too young to do much and I intend to bring him on slowly."

Silver Zaanif, who is 100 per cent Crabbet bred (traditional line of English breeding), is expecting his first foal later this month, out of a bay Crabbet mare imported from Australia, called Palma Benay.

The main sponsor for the Wadebridge ride was Sweet Meadow Horse Feeds, who donated a prize for the Best Conditioned horse in each class, as judged by the veterinary team at the final vetting. Equus Health gave prizes for the Best Turned Out horses and riders. Donations were collected for Shelter Box, who gave a display of the contents of the boxes sent out to disasters worldwide.

The Best Shod Horse of the day was Ally McBeal, ridden by Tamsin Swiddles, who won a prize for their farrier.

The next competitive ride in the South West will be Blue Chip St Meubred's on Sunday, April 25.

Before this, there are three short training rides, the Fal Valley Clay Ride, Ladock and the Broadbury Ride. For details and entry forms visit www.endurancegbsouthwest.co.uk.
Publié par The Equestrian Vagabond à 08:03 Aucun commentaire: