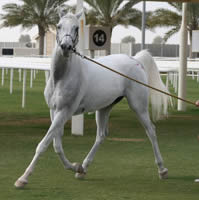 The FEI has added two new categories to the rankings, the Open Horse and Junior/Young Rider Horse categories. Rankings include events up to 11 February.

Of the riders, New Zealand's Alison Higgins (11) is the sole non-UAE rider in the registered rider world ranking list, which is topped by Hamad Mohd Al Ahbabi.