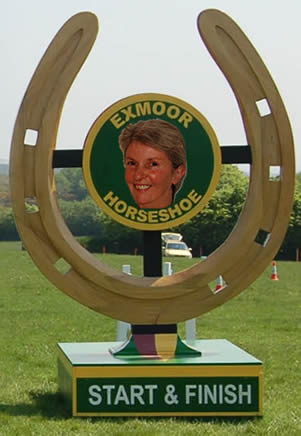 They call her, Mrs Golden Horseshoe.

They also say you need lots of endurance to keep up with her.

For Barbara Wigley, a busy, fast-talking, no-nonsense, endurance rider is the driving force behind what over the years has become one of the great, legendary endurance rides in the world.

Not that there haven't been set-backs along the way. In fact, at one time it looked as though the days of the Golden Horseshoe, which today covers 100 miles of the toughest terrain in the country, were very nearly over.

Barbara was born in Stretford, Manchester. Her family were distinctly non-horsey. Her father was a painter and decorator. Eventually, he opened a painting and decorating shop in nearby Urmston.

"As a kid, I can remember begging and pleading with them to let me have a pony," she says. "When I was 11-years-old I managed to persuade my mother to let me have riding lessons. She agreed. But it was on condition I didn't tell my father..."

For more of the article:
http://www.horseytalk.net/HorseyInterviews/BarbaraWigley.html
Publié par The Equestrian Vagabond à 15:58