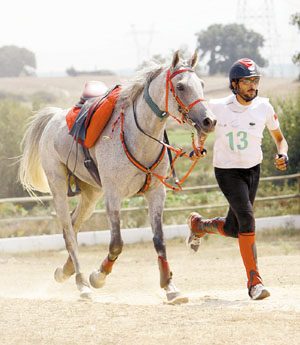 BAHRAIN is bidding to become the first nation in the world to host the Endurance Horseride Grand Prix. The idea, which was masterminded by Bahrain Royal Equestrian and Endurance Federation (Breef) president Shaikh Nasser bin Hamad Al Khalifa, aims to spread endurance horseride and place Bahrain on the world map.

Following the Bahrain Royal Endurance Team's success by coming second overall in the European Endurance Championship in Portugal, Bahrain is keen to maintain its outstanding reputation as one of the most developed countries in this traditional sport.

Shaikh Nasser will invite senior officials from the World Equestrian Federation (FEI) to visit Bahrain and brief them on the competition, which is similar to motorsports' leading event 'Formula One'.

Shaikh Nasser said the idea of the Grand Prix is to have a series of endurance races in different countries from all around the world, including Bahrain.

The Breef chief confirmed that the federation is preparing for the biggest cash award in this championship which will be sponsored by various companies and establishments in Bahrain.

"If everything goes as planned, this Grand Prix will be held in different locations across the globe and particularly in touristic venues to highlight the history of the countries," said Shaikh Nasser.

"We will discuss all details with the International Equestrian Federation to prepare a complete study about this idea and here at the Bahrain Federation we are very much optimistic about making this dream come true," added the Royal Endurance Team captain.

"Having this event in Bahrain will be a key contributor to the expansion of endurance sport in Bahrain, having been widely practised in Europe, America and Australia. It will also bring many new riders into the competition," he said.

"History of endurance races in Bahrain is very short but with His Majesty King Hamad's support and the efforts of the officials from the national federation have made the Kingdom one of the hot contenders in any regional or international championships," added Shaikh Nasser.

"Endurance activities in Bahrain enjoy the whole-hearted support of His Majesty. By visiting the championships regularly and extending full support to the riders, His Majesty inspired them to achieve higher goals.

"Without the extensive support and encouragement of His Majesty, this sport in Bahrain would never have reached this level of professionalism and worldwide recognition. The riders and the people of Bahrain are proud of His Majesty, who extends his unlimited support to this sport."

One of the fastest growing sports in the world, undoubtedly, is the endurance riding. The kingdom saw the real birth of this sport in its soil on April 7, 2000.

His Majesty instructed to organise the 120km Bahrain International Endurance Horse Riding Championship as two separate races for the riders of UAE and Bahrain with the aim of creating a pool of knowledge for the participants and to help them realise their pitfalls as well as potentials.

Inspired by the success of the first international championship, the Kingdom began to organise various types of championships from October to May every year.

The participation of the Royal team in the World Endurance Championship FEI in Italy in September 2003 has proved highly beneficial.